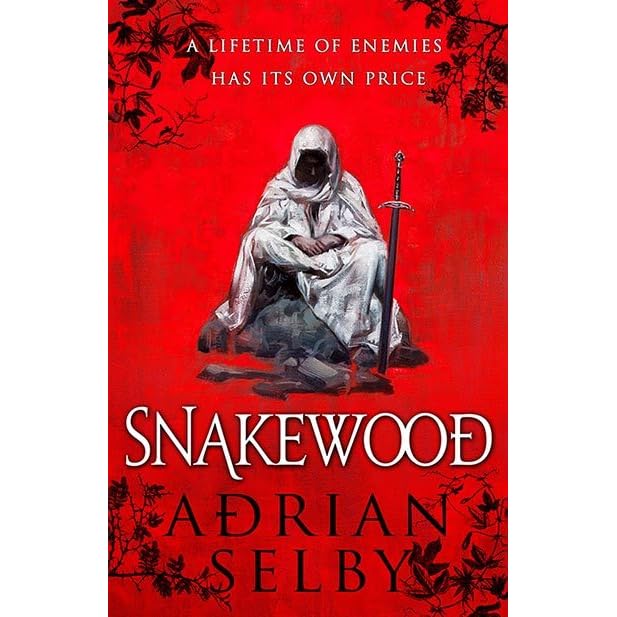 The Good: A masterclass in character/narrative voice(s), kickass murderous mercenaries, a unique magic-system based on what is essentially magic-mushrooms and their effects, and a genre-bending/blending/breaking triumph of style.

The Bad: Now, whilst this wasn’t a ‘bad read’ for me, the style and voice will be polarising. As a reader you will either hit the ground running, or, hit the ground and land on your face only to ask through a mouthful of dirt ‘WTF was that?’

The Ugly Truth: Snakewood is a Tarantino-esque masterclass in voice and storytelling, reminiscent of the Malazan books of the Fallen, Mark Lawrence, and Anna Smith-Spark. Colorful as it is characterful, Selby combines the full artsist’s palette of ‘black and white’ ‘good vs evil’ fantasy, the moral greys of grimdark, and the full rainbow of literary fiction, to weave a no-holds barred take-it or leave-it tale of betrayal, revenge and ‘you get what you deserve’.

Review: In my honest opinion, the best books make you, the reader, feel something. Which is why Snakewood is one of the very best of books.

That is a good thing – after all, you can’t please everybody. And Snakewood isn’t in the business of pleasing anyone.

This book is brutal. Both in style but also in characterisation. In true grimdark fashion everyone you meet in these pages is a bastard, and the only thing that exceeds the bad things you’d wish upon them is the bad things they inflict upon each other.

Snakewood is an account (or, better yet, ‘multiple accounts’) of a mercenary crew by the name of Kaillen’s Twenty. Kaillen’s Twenty were a crew of renown, not least for their namesake’s prowess in all things martial, but also for the potency of their fightbrews. In Selby’s world, fightbrews are concoctions that can imbue superhuman strength and agility (think: Captain America) but also protect the user from the poisons, venoms and toxins – all of which are delivered in a variety of means including ‘arrowbags’ (think: smokebombs), applied to weapons, scattered around rooms etc.

Now, Kaillen’s Twenty has been disbanded for years, but someone is hunting them down and killing them. One by one. Now, it’s down to the surviving crew members to figure out who’s hunting them down, where they’ll strike next, how, and most importantly why.

It all sounds like your normal, straight-forward, low-fantasy fare. But there is nothing normal about Snakewood. This is something bold, brave, a little bit barmy, but entirely brilliant. As equally as brilliant and as barmy as the magic-system based on what is essentially magic mushrooms…

And this is where you either get on the bandwagon or end up getting off before your stop and waving it on as it disappears into the distance. I mentioned above ‘multiple accounts’ and this truly is. Think multiple point of views, perspectives all telling a non-linear plot. Snakewood has it all. And then some!

The storytelling and style remind me of the first time that I saw Pulp Fiction. It’s very Tarantino-esque. You could also liken it to the Hateful Eight or Kill Bill. From the non-linear plot, to the use of ‘perspective’ as a tool, Selby doesn’t just dare to be different, he pushes the boundary like no other author I have read (yet).

On the note of boundaries, for me, Snakewood straddles genres. Or better yet, it straddles what is perceived as ‘literary fiction’ and ‘genre fiction’. In recent times there continues to be a backlash, or better yet snobbery, from literary aficionados when it comes to fantasy and ‘genre’ as a whole. To me, this has at times smacked of ‘elitism’. Just because fantasy doesn’t prescribe to the same lofty heights of ‘250 pages to detail a mid-life crisis that should be drowned in the wake of the #MeToo movement’ doesn’t mean that it’s unworthy of the pages its printed on. In fact, I think society as a whole is challenging a lot of the hangovers of the ‘how things used to be’ heyday, which is a damn good thing. The point is, as we see and partake in the evolution of society, and all things that go with it, Snakewood and Selby aren’t ‘the missing link’ nor are they ‘the next stage’ but they are a hugely important part of the chain.

Anyone who is an aspiring writer – heck, anyone who is a writer, unpublished or not – has a lot to take away from reading Snakewood. We’ve all heard the term ‘voice’ and what it means in writing and reading. In Snakewood, Selby taught me more about voice – both that of the author and the character (and, by extent of both, the narrator) – than any other ‘lesson’, ‘how to’, blog or book I have ever read.

The best way I can put Snakewood’s collective ‘voice’ into words is: method writing. Like method acting, but, well, you get the jist.

To summarise, there is no better way to describe Snakewood than: This is MUST read fantasy. It defies expectations, for better or worse, and whilst it won’t be for everyone, it will certainly open your eyes to the possibilities of fantasy, and indeed, storytelling itself.